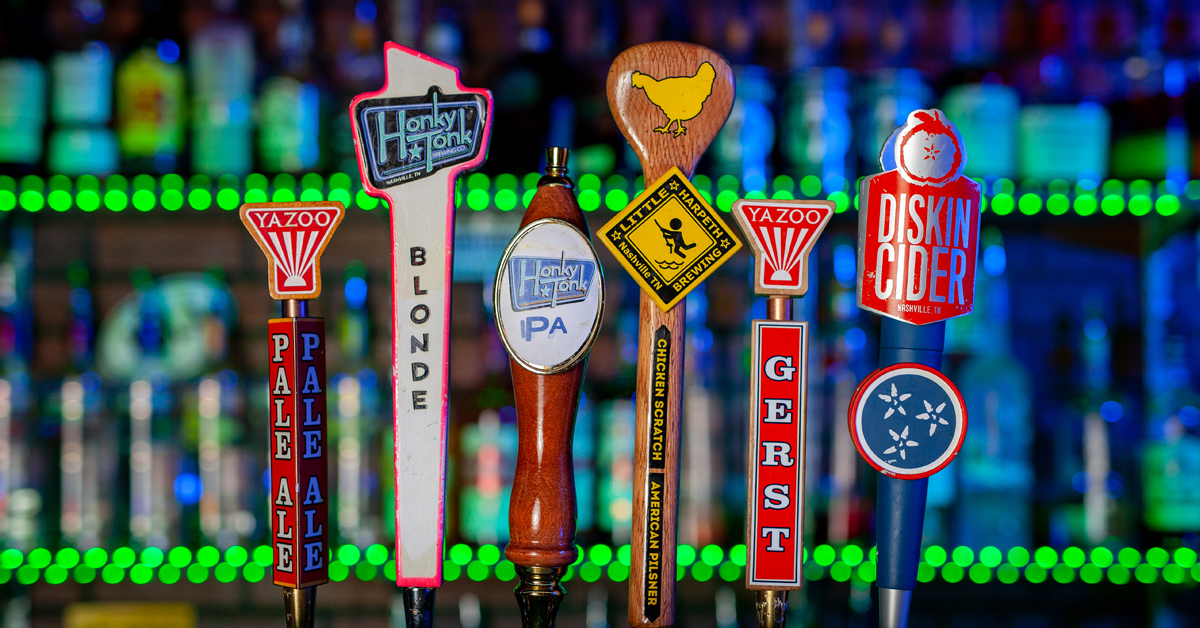 Our music might be from the bayou, but our beer is made right here in Nashville, Tennessee! In any given month, we always have a unique selection of brews hooked up to our taps, so when you stop by our bar and restaurant you can enjoy a bit of homegrown flavor with your blues and boogie music. Continue reading to find out which six we’re featuring. Come sample a pint the next time you find yourself strolling down historic Printer’s Alley in search of a good time.

If there’s one thing Nashville’s known for it’s its honky tonks. That’s why the brewers at Honky Tonk Brewing Company began their operation in earnest—to pay homage to the memories and soul of Music City by promoting shows at the venues and bars that serve their beer. One of their beers that consistently garners the best reviews is their West Coast IPA. Surprising many who try it for the first time, this fruity and floral hoppy ale is the perfect beer to keep your taste buds fully occupied and fully satisfied.

There’s something so easy and refreshing about drinking down a crisp, clean blonde ale. Its smooth finish will stun you into submission, and before you know it, you’ll be searching for the bartender’s eye to signal one more round. Infused with just-the-right-amount of locally sourced Orange Blossom honey, this beer straight up doesn’t take no for an answer. Enjoy this blend from the boys at Honky Tonk Brewing Company on an afternoon playing hooky from work to hear some of the incredible live music we have every day from noon till close!

Little Harpeth Brewing began with a simple mission to preserve the past, enjoy the present, and sustain the future with green initiatives. Their flagship American pilsner embodies that simplicity with its light body and modest aroma. Made from malted barley and locally grown corn, this beer can be enjoyed with some blackened fries, gator bites, or fried pickles. Order up a round for your friends and enjoy this flavorful and floral offering from the local brewers who have a mind for their environment and carbon footprint, and take measures to make an impact in their local community.

Nashville Brewing Company was the original Nashville brewery. And in 1890 it was acquired by two German brewers from Ohio: Christian Moerlein and William Gerst. The brewery itself operated for more than half a century till 1954, when national competition became too fierce and forced them to shutter their doors. Now, thanks to the fine folks at Yazoo Brewing Company, William Gerst’s memory can live on in this dark amber brew with notes of stone fruit and semisweet caramel. Drink one down today in historic Printers Alley and pay tribute to the Gerst’s original recipe.

This new spin on an American staple is infused with a newly discovered Amarillo hop variety and maximizes bursts of aroma and flavor. When English Pale, Munich, Vienna, and Crystal malts get together in one glass, magical things can happen. Don’t be surprised if after one taste this pale ale becomes your new go-to beer after a hard day’s work or preferred pint on a leisurely weekend afternoon. Try one on for size the next time you’re enjoying some authentic blues music at our bar!

Founded with a mission in mind to bridge the gap between wine and beer, the people behind Diskin Cider have proved they’re more than up to the task at hand. Bringing true craft cider to the South, they have perfected their simple branch-to-can fresh recipe for all to enjoy. Their Lil’ Blondie semi-sweet southern cider is just fresh pressed apples. You heard that right: no empty sugars added, no unnecessary flavors or concentrates, just apples. If you stop by looking for something sweet, be sure to order a pint of this irresistible concoction from our tap wall with an order of chicken wings or voodoo sliders

4 Holiday Drinks to Quench Your Thirst this Summer
Add These Four Amazing Artists to Your Calendar!